My name is Russell Damis, and together with my wife Cassandra, I own NJ Threads Embroidery.

To back up a bit, I enlisted in the United States Marine Corps in June of 2001. Shortly after, The US plunged once again into a foreign war. I spent the next 10 years in the infantry, and then Special Operations forces, either fighting in or training to go to war.

I met my wife in 2006, and within 2 years we were married with two children. My combat injuries were beginning to catch up with me, and my military career was winding down to an end. It became evident that it was time to retire from military service and move on.

In 2007, my brother started a screen-printing business. While I was away, he was building a solid client base back home. By 2012, when it was my time to medically retire, he had built up a nice base of clients. My family and I returned to NJ, and I went to work with my brother.

We soon realized how much business we were losing by not offering embroidery as a service. After some discussion, we agreed that I would attempt to learn embroidery and he would stay with screen printing. I had access to an older 6 head machine, and someone who was willing to show me the ropes. The learning curve was pretty steep on the older, analog style machine, and the space wasn’t set up great for embroidery.

We started researching smaller single-head machines that would fit in my home. The commute to the shop was brutal, and I really wanted to be able to spend more time with my family while working from home. 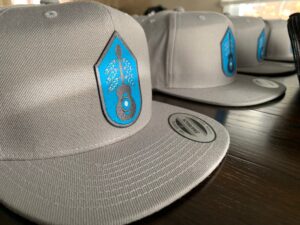 We came across Melco and liked all of the specs…American company, 16 needles, and the fastest stitch speeds out there. I also found the “actifeed” feature attractive, as I was having trouble with thread tension on the older machine. A lot of the reviews stated that Melco customer service was the best in the industry. That also stuck out, as I know one thing you don’t want to be is down and out in this business. Lastly, I like the ability to link the machines together as you add more. As our business grows, we can add the amount of heads we need, rather than have to add a bulky multi-head machine that can only run a single job at a time.

We are almost 2 years in with our Melco EMT16 PLUS and I can’t say enough good things about this company. The

machine produces incredible work. Our business does about 80% hats, and it stitches them with ease. The learning curve is pretty steep, and the training is a huge help. In my opinion, worth every penny. But, if you take the time to practice, and learn the nuances of the machine, you will produce great embroidery. The Melco staff is second to none. From sales, to tech support, to instructional videos, they are the nicest people on the planet. Tech support is incredible. Any time I’ve had an issue, they’ve been able to get me back up and running. I’ve had parts overnighted and at my door by the next morning to make sure we’re not down too long.

The sales staff is amazing and super helpful. Sue Gorton is excellent, and always willing to help.

Purchasing this machine for business has been one of the best decisions we’ve made, and we will be adding more Melcos to our business in the future. It’s been a lot of fun learning this business, and Melco has made it that much better.